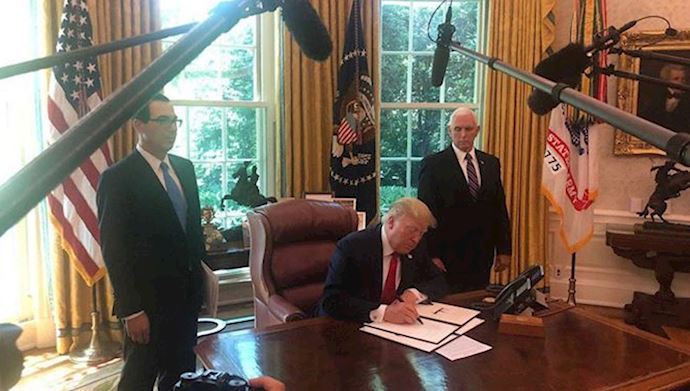 Iran, June 25, 2019 – US President Donald Trump on Monday signed an executive order imposing fresh sanctions against the clerical regime ruling Iran. These sanctions, described as “hard hitting” by Trump, are intended against the mullahs’ regime Supreme Leader Ali Khamenei his assets and his financial system.

“We will continue to increase pressure on Tehran,” Trump told reporters in the Oval Office. “Never can Iran have a nuclear weapon.”

The U.S. already has sanctions on Iran’s oil industry and other sectors.

Tensions between the U.S. and Iran have grown since Trump pulled the U.S. out of the multilateral Iran nuclear deal that had been brokered during the Obama administration.

“We do not seek conflict with Iran or any other country,” Trump said. “I can only tell you we cannot ever let Iran have a nuclear weapon. I think a lot of restraint has been shown by us but that doesn’t mean we’re going to show it in the future.”

Later, Trump said the sanctions would have been imposed regardless of the incident over the drone.

Sanctioning Khamenei & his office, the epicenter of crime, corruption & terrorism in #Iran, is spot-on & most imperative. These sanctions must be expanded to the mullahs’ Ministry of Intelligence & Security (MOIS), which has blocked the uprising for a #FreeIran.
— Maryam Rajavi (@Maryam_Rajavi) June 24, 2019