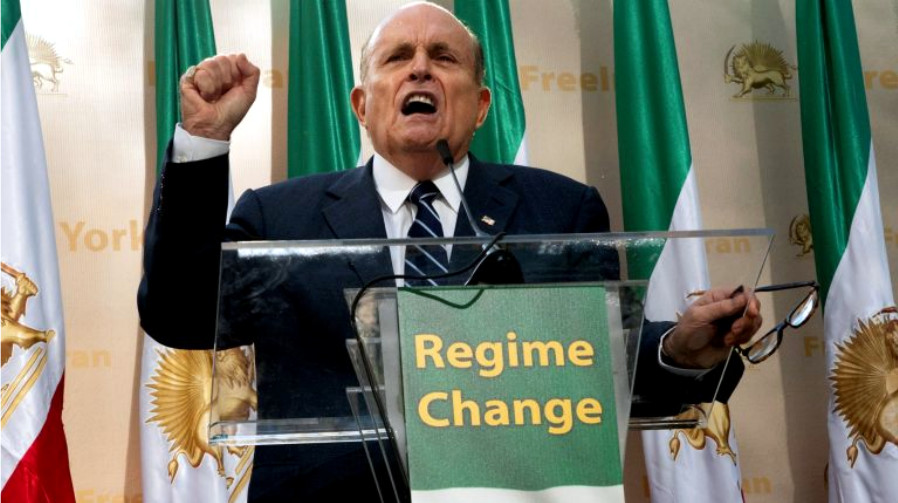 UNITED NATIONS — While President Donald Trump signaled to diplomats and heads of state here on Tuesday that he is willing to work with Iran’s leadership, thousands of Iranian-Americans chanted, sang and called for the end of the regime during a large rally outside the UN buildings.

“I’m one voice in thousands of Iranians here to say no to Khamenei, no to Rouhani, no to this barbaric regime ruling Iran,” said Kazem Kazerounian, a University of Connecticut professor of mechanical engineering who has lived in the United States since he came to study at the University of Illinois in 1978.

He has not returned to his homeland, he said, because his activities against successive administrations that came into power since the 1979 Iranian Revolution, which brought the current line of Iranian leaders into power, would put him in jeopardy. He said he sees no difference between Iran’s leaders now or 40 years ago.

“They are all part of the same regime, part of the same thing — nothing has changed,” he said. “Corruption has increased, the nepotism, the barbaric suppression of freedom … Beyond that, they are now expanding terrorism and exported it outside the borders of Iran.” Kazerounian joined a group including former New York City Mayor Rudy Giuliani, former Connecticut Sen. Joseph Lieberman and former New Jersey Sen. Robert Torricelli in Dag Hammarskjold Plaza.

Protesters sported yellow vests and waved flags while promoting an alternative to Iranian President Hassan Rouhani at an event that stretched a city block between First and Second avenues.

The event was organized by the National Council of Resistance of Iran, which hopes to replace Rouhani with a democratic and secular leader, organizers said. Demonstrators sported the hashtag #freeiran. They played drums and listened to Iranian music as speakers took the stage to make the case against Rouhani.

“The regime is seeing something that many are perceiving here in the west,” said Giuliani, referring to Rouhani and what he called greater support than ever for his removal. “They are seeing signs that they may be coming to an end … This is the sign of a regime that’s crumbling.”

The likeness of NCRI’s president-elect, Maryam Rajavi, was posted on flyers and signs displayed throughout the demonstration, one reading “Democracy, Freedom with Maryam Rajavi.” Organizers read to the crowd a message that Rajavi had written to inspire the group.

“Your gathering says ‘No’ to the continuation of the rule of a bunch of occupiers and thugs in Iran,” the letter said. “And, it says ‘Yes’ to the overthrow of this regime by the Iranian people and the Iranian resistance.”

Inside the UN General Assembly, Trump told the leaders during the annual General Debate that they should unite against Iran’s ambitions. The exhortation comes as the United States and other countries consider whether Iran was behind a drone and missile attack on oil fields in Saudi Arabia this month — and what, if anything, to do about it.