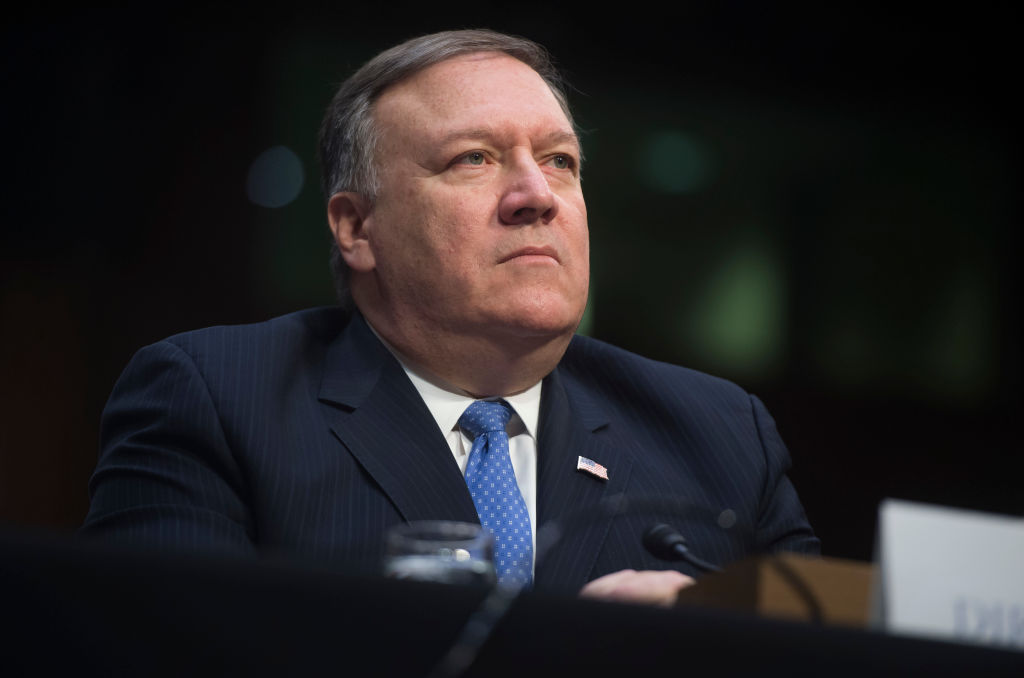 Since Donald Trump fired Secretary of State Rex Tillerson last week, foreign policy talk in Washington has centered around the president’s nomination of a replacement-and how the Iran nuclear deal will fare under this new pair. Of course, CIA director Mike Pompeo might not even win confirmation to become secretary of state. The Republicans hold just a onemember majority in the Senate, and one Republican senator-Kentucky’s Rand Paul-has already declared he won’t vote for Pompeo. But a Democratic senator who voted against confirming Pompeo as CIA director has indicated an openness to voting for him now-and he did so at a lunch heralding the Iranian resistance.
Ben Cardin, Maryland Democratic senator and member of the Senate Foreign Relations Committee, was one of a handful of speakers at “Iran Uprising, Harbinger of a Free Iran,” a lunch held last week in a Senate office building, sponsored by the Organization of IranianAmerican Communities and its Arkansas chapter. He addressed the ongoing protests in Iran, which began in December and continue to call for an end to the country’s nearly 40year-old theocracy. “When we stand up and speak out on behalf of rights, we don’t have to worry about someone coming knocking on our door arresting us or torturing us. That’s not true in Iran today,” Cardin noted. “Yes, we have an agreement with Iran with regards to their nuclear responsibilities, and we can argue whether that agreement was strong enough or not strong enough, should we modify it now or not modify it. I’m involved in some of those discussions. But one thing is clear, Iran is violating international norms on how it treats its own people, and that that is actionable, and the United States must be in the leadership to protect the rights of the people of Iran.”
He immediately shifted to discuss Trump’s latest nominee. “I serve on the Senate Foreign Relations Committee. And I had the opportunity there to press a lot of these issues. So I want you to know I did talk with Mr. Pompeo, the new nominee for secretary of state, and we’re going to talk again next week,” Cardin said. He then addressed one of the other speakers, former Democratic senator Joe Lieberman. “But one of the issues, Joe, that I raised with him is his commitment to stand up for American values. Joe Lieberman is one of the great leaders in this country and always stood for a strong national defense for this country. Our defense and strength of America is not just in our military, it’s in the values that we hold, the ideals that we hold. And the secretary of state, the Department of State, needs to press those ideals. And sometimes, you know, as a matter of convenience, should we give up our campaign to fight, to protect the rights of citizens in their own country if we need their leaders to go along with us on some trade agreement or some military campaign? And I want to make sure that the secretary of state will always represent our values and stand up for human rights globally. That’s particularly important today for the future of Iran.”

It was a striking statement from one of the more liberal members of the Democratic caucus. Lieberman followed his former colleague and gave a special shout-out to Senate and House staffers in the room: “you really have a chance to make history in the work that you do, for the members that you work for. It’s easy for me to say this now that I’m no longer a senator, but most of the important decisions made in the Senate are made by staff members,” he said to great laughter from the audience.
The onetime Democratic vice-presidential candidate gave a strong statement in praise of Pompeo after he, too, addressed the nuclear deal.
Earlier, National Council of Resistance of Iran president-elect Maryam Rajavi spoke to the gathering via video from Paris. “Today, it is universally accepted that the clerical dictatorship is responsible for gross human rights violations in Iran. The regime is also recognized as an immediate threat to global peace and security by continuing the wars in Syria and Yemen and the terrorist operations by the IRGC-backed militias in the region, through money laundering and financing terrorism, with its ballistic missile program in violation of the U.N. Security Council resolutions, and by taking hostage Western citizens.” She updated the audience on the latest strikes and demonstrations in Iran and asked the world to end its policy of appeasement. “The people of Iran expect the world to predicate their relations with the mullahs on an end to torture and executions.”
Lieberman referred to her speech when making his own. “President Trump has given warnings that he’s prepared to pull out of the Iran nuclear agreement unless the European allies join with him in changing fixing the agreement so that it covers the missile development of Iran so it, as Mrs. Rajavi has called for, takes out the sunset clause so that commitment to denuclearize or not nuclearize is permanent, not just temporary, and that it also ceases its aggression throughout the region. I hope the president sticks to this series of promises. I believe he will,” Lieberman said. “Incidentally, I take great heart and encouragement from his nomination of Mike Pompeo to be the next secretary of state. I know Mike. He’s a tremendously gifted person. On the question of Iran, he understands the threat they represent to our security and to our values. And I think he will be a strong ally of our cause.”
The lunch was a rare moment of bipartisan comity on the Hill. Other speakers included John Boozman, Republican senator from Arkansas, and Mitchell Reiss, who served as policy planning director at the State Department under Colin Powell, as well as General James Conway, former commandant of the Marine Corps.
Lieberman noted that the current protests differ from previous ones, like that of the Green Movement in 2009, because these constitute “a broad-based anti-regime uprising.” But he added: “What else is different about the protests this time? A big part of the difference has been referenced already, which is that unlike 2009, when the government of the United States-after all the greatest democracy in the world-believing in the principles which we do, turned away from the protest I think because of the almost blinding focus that the administration had on securing the Iran nuclear agreement. This time the administration of the U.S. stood with the people, with the protestors, against the regime. And so too did and are members of both political parties in Congress. Ben Cardin was here before. Senator Boozman is here now. They represent the bipartisan support for the people of Iran and their freedom. Why? Because Iran not only threatens our security, it demeans our values and offends them as well.”